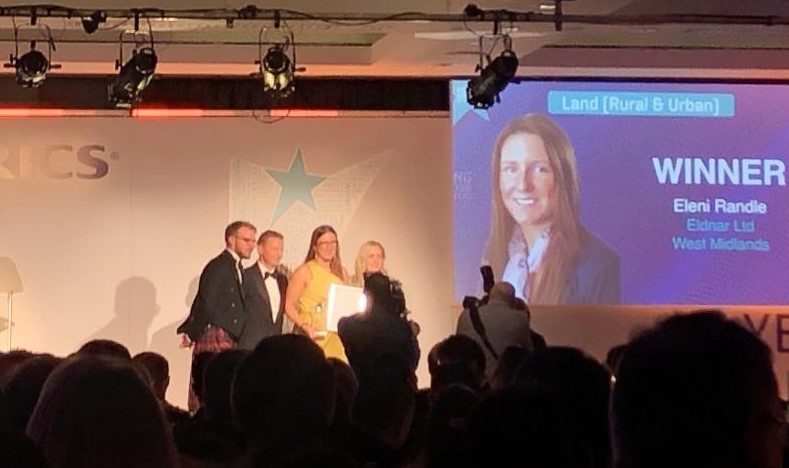 I am genuinely over the moon to announce that last Thursday I was an award winner at the RICS Matrics Young Surveyor of the Year Awards.  I won my category (Land – Urban and Rural).

The award sought “an inspiring individual who has had a positive impact on conservation, the environment, planning or any aspect of the management of land and property assets in the countryside”.  The awards ceremony saw over 400 or so people attend at the Royal Garden Hotel, Kensington.  My category was 5th, out of ten, to be announced.  Seeing my name on the big screens as they read the shortlist was a very proud moment.  In announcing the award it was stated the individual who had won the award “had extensive qualifications and had gone on to start their own business”.  At this point I knew it was me, my name was announced, music started playing and my face, name and company name was on two (very large, too large!) screens either side of the stage.  Walking up (from the back of the room, typically!) didn’t actually feel real and was actually quite overwhelming.  I have received a beautiful trophy and certificate confirming that I am Young Land Surveyor of the Year!

Upon leaving the venue they had placed booklets outside with profiles about the winners of each category.  The judges summary of me was:

“The youngest and first female partner equity partner within her previous firm in its 120-year history, at the age of 28 years old. After serving as a partner for three years she then went on to establish her own company at the age of 31. In January 2019 Eleni became one of the youngest Fellows of the RICS. Her qualifications don’t stop there, she is also a Fellow of the Central Association of Agricultural Valuers, a registered Valuer and a Chartered Town Planner. This dedication to obtaining an extensive knowledge of sectors demonstrates motivation, but it has also been of great benefit and enables her to champion the professional working on varying projects.  Eleni has been a mentor for several years and has seen those she has accepted for work experience, continue to university and progress on to passing the APC; providing on-going advice at each stage. An extremely strong champion within the profession, pushing boundaries to achieve objectives.”

A massive massive thank you to everyone who has supported me (obviously my parents get a massive shout out!), especially to clients who trusted me when I went on my own this year.  To anyone who ever underestimated me….. enjoy!